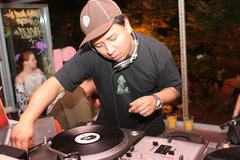 ﻿﻿﻿
When his beats hit the floor, the flow is always funky and chunky beats - any tempo, every style. MR FUDGE (aka Yusuf Akhtar) is a Canadian-born DJ and producer who is versatile in each solid set that he delivers. A crate digger and record collector since the college radio days, he spins a wide range of music from hip hop, trip hop, and mid-tempo funk to the sounds of disco, house, breaks, and drum & bass.

Consistently active since the mid ‘90s rave scene, Yusuf spent 2002-2010 in South Korea for a period of time that challenged him to push his production work, develop a sound that best encompasses his energy and intensity behind the decks, and gain recognition in order to stake his claim as a player in the scene internationally. During that time he held residencies at Club M2 and Vinyl Underground, headlining many events alongside Korea's top calibre DJs and various international acts. Armed with a wide array of techniques and years of experience, this veteran selector can hammer out ultra fat tunes with every killer DJ set that he smashes. Blackbelt breakbeat kung fu is now in session!

He is once again based in central Canada where he works both as a graphic designer and organizer of events from club nights to festivals.  He maintains a regular DJ night in his hometown and produces an ongoing series of webcasts live from his basement studio "the Chocolate Dojo" throughout the quarantine of 2020, and beyond...